Simply putting two new animals together and expecting them to just get get along is asking for trouble… first impressions matter, and if your new furry family members don’t hit it off in the beginning, it’s possible they may never learn to get on.

Although it’s tempting to give your new furry friend free roam of the house, it’s best to initially put them in a crate or separate room out of sight of your existing pets. Not only does this give them the opportunity to slowly get used to their surroundings, but after a few days their scent will be on their bedding and toys. Cats and dogs have a very strong sense of smell, and we can use this to our advantage when introducing a new pet.

Once your new furry friend has had a couple days to settle in, swap their bedding and toys with your existing pet’s. This gives everyone a chance to get used to each other’s smell.

The next step is to put your existing furry family members in a separate room (or outside) and allowing your new pet to roam around the house, leaving his scent around. Only allow him out for 15-20mins at a time, several times a day. Once your new furry friend is back in his separate area, allow your other pets to roam the house, picking up the smell of the new addition to the family.

Your furry family members might be a bit confused by the new smells and in need of reassurance. You will know you’re ready for a face-to-face meeting when your pets are no longer running around chasing the new scent.

When you’re doing the first face-to-face meeting between two dogs, it’s best to organize this on a neutral territory away from your house. Most dogs can feel a little territorial when another animal first enters their home.

Try to find a small, enclosed area where they can run around, as having them on a lead may also cause some territorial behavior. Allow your old dog to run around the area with the new dog out of sight. Then swap them over, still without physically meeting. The new dog will detect the scent of your old dog in the area and should be comfortable with it as you have already “introduced” them.

When you are ready you can then bring your old dog into the enclosed area. They should now be comfortable enough with each other to meet. Keep watching their behavior as they meet. High, wagging tails generally indicate they are not feeling threatened and are happy. Low tails, between their legs and low flat ears may indicate all is not well. If this happens, separate them and try getting them used to each other’s scents again.

If you are bringing a puppy into a household with an older dog, you should always supervise them when they are together. Puppies always want to play and may be too rough for the older dog. Your older dog will still need alone time and time with the family so he doesn’t feel too upset and threatened.

If they still do not appear happy when meeting you may need to seek the advice of a trainer or behaviorist. Adaptil collars or diffusers may also help to keep your older dog calm when dealing with a new friend.

If you are introducing two cats to each other, start by feeding them on opposite sides of a door, gradually moving their food bowls closer to the door. When they are comfortable with that, open the door slightly so they can see each other while they are eating.

Cats can make a lot of hissing and growling sounds without actually causing any harm. If you think one cat is becoming aggressive, take a step back and move at a slower pace until they are comfortable with each other. Always have safe place for each cat to escape to; a box or crate they can hide in if they are feeling too overwhelmed. By taking it slowly, your two cats should be able to adjust to each other over time.

Unfortunately, some older cats that have never had to share their home may never welcome another cat into their space. If this is the case, it will be necessary to keep the cats separate to avoid any stress on either animal.

You can also use Feliwayin your house to try help keep your cats calm, which uses a natural cat pheromone to reduce stress, especially for cats living in a multi-pet home.

Introducing a Cat and a Dog

Having a dog and a cat get along can be challenging, and will depend a lot on their previous experience with the other species.

Some young, playful dogs may want to play or chase the cat, which your feline friend will likely perceive as threatening behavior.

Again, the best advice is to keep them separate initially, giving them time to get used to each other’s scent. When it’s time for a meet and greet, keep your dog on a lead and have him lie down. Have lots of treats and reward good, calm behavior. Bring the cat into the room but on the opposite side to the dog. Let the cat play around you without getting too close to the dog.

If the cat is comfortable with the dog, let her go closer to the dog on her own. Keep your dog lying down and calm with the treats. Let the cat come to the dog and introduce herself. It is important to keep these sessions short but frequent.

Never allow the cat and dog to be together unsupervised until they are completely comfortable in each other’s presence. Make sure you have an escape place for your cat if she is feeling threatened or wanting to get away (preferably somewhere high up that the dog can’t reach). If either animal is showing inappropriate behavior, separate them again and slow down the introduction. 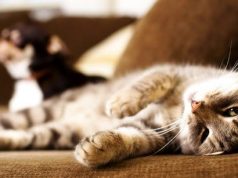 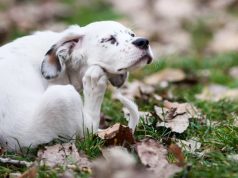 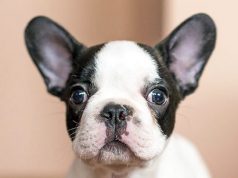