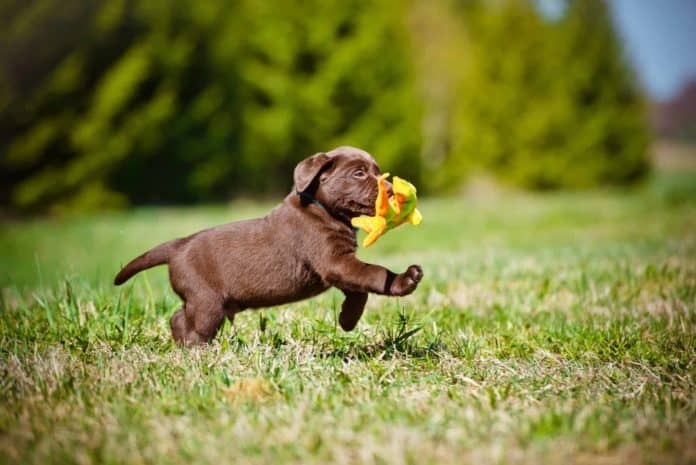 Welcoming the patter of tiny paws into your home is an exciting time, but do you wonder how big the owner of those paws will become? (jump to Calculator)

From living in a big enough house to choosing the correct crate, having an idea of whether that cute puppy is going to grow gigantic or not, is crucial to planning. Of course, you may have a purebred puppy and have a rough idea what to expect, but even then Mother Nature sometimes throws up a surprise or two.

When Will My Puppy Stop Growing?

If your Great Dane pup is growing faster than Japanese knotweed, you may be hoping that he’ll soon stop growing.

However, the larger the dog breed, the more months they grow for…makes sense really. So first think about whether your pup is a toy, small, medium, large, or giant breed. Those at the pocket-sized end of the scale usually reach adult size as early as six months of age, whilst an out-sized giant dog carries on growing for 18 – 24 months.

Other Factors that Influence Puppy Size

Other factors that influence the adult’s size include:

There is less guesswork when you have a purebred pup because you have the parents as a guide. Hopefully, you saw the mother dog, and so have an idea of her size. But what if you rescued a pup and never saw his parents?

A lot of pet parents put store by the size of the pup’s paws. The youngster with large feet is said to have a lot of growing to do! To a certain extent this is true but don’t set too much store on it. The most likely explanation is the paws have had a growth spurt ahead of the rest of the body, which will soon catch up. Thus, those large paws on a pup (if they don’t grow anymore) may actually become small paws on an adult.

What can you use to predict your puppy’s size?

Here are a couple of rule-of-thumb guides to predict your pup’s adult weight.

Firstly, if your dog had puppies, an average newborn doubles their birthweight by one week of age. After that, their weight gain is a cumulative 5 – 10 % increase day on day.

But by six weeks of age, small and big dogs gain weight very differently. Small breeds tend to gain 5 oz. a week, with larger breeds gaining nearly six times this at around 2lb 5 oz. a week.

The first insight into their ultimate adult weight again comes at six weeks of age. Simply take their six-week weight, double it, and then double it again. For example, a 1 lb. puppy at six weeks old will weigh around 4lb as an adult.

You have to wait a bit longer for these guys because it’s their 14 week age you use as a predictor. Also, the math is a bit more complicated. To work it out you double the pup’s 14 week age and then add on half of the original 14-week weight.

For these guys, another weight landmark is the six-month point. This is the age when the pup weighs approximately two-thirds of his expected adult weight. Although that said, giant dogs are only approaching half their adult weight at this age.

Another Way of Working Out Adult Size

Maybe you adopted the pup late and don’t know their six-week weight. What’s to be done?

OK, try this alternative calculation to get an idea what to expect.

Whilst the formula remains the same for toy through to giant dogs, what’s different is their age when you measure their weight.

First of all the formula:

Take the pup’s weight in pounds (at a certain age) and divide it by his age in weeks, then multiply that number by 52 (the number of weeks in a year). This should predict your pup’s ideal adult weight.

For your convenience, we have included a calculator to help you out:

Enjoy the benefits of a feathered friend who is happy, healthy and content. If you own...
Previous article
Ferret Food: A Recipe for Success
Next article
How to Build a Cat Tree and Scratching Post

How do I Train my Ferret? Quick Tips to Teach Your Ferret The Basics