The Most Common Skin Conditions in Dogs 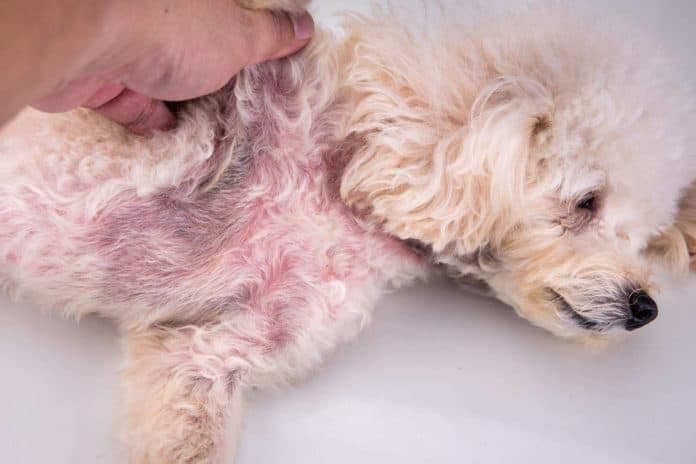 Dog skin is surprising stuff. For example, canine skin is thinner and more fragile than human skin. Who’d have thought!

Think of skin like a brick wall, with the bricks representing skin cells. Not only do dogs have fewer layers of bricks (their skin is literally thinner) but the bricks are basic and the mortar weak, which makes canine skin less resilient to damage.

Of course, the advantage dogs do have over people is a thick layer of fur. This acts as a protective barrier, the equivalent of clothes on top of the skin. But if this shield is breached by scratches, cuts, or bugs and parasites set up home in the fur, and then the result is often irritated, infected, or inflamed skin.

What Kind of Dog Skin Conditions Are There?

There are a myriad of skin conditions that affect dogs. Confusingly when skin is damaged it has limited ways to respond and tends to either ulcerate, redden, or become infected. This means many conditions look similar, and it’s tricky reaching a diagnosis on physical appearance alone. This is why it’s important to seek veterinary attention if your dog has bad skin. Delaying seeking help often results in complications, when the damaged dermis allows bacteria or yeast to breed and create a secondary infection.

From parasites to cancer, infections to autoimmune disorders, there’s a surprising range of dog skin conditions which can look deceptively similar.

Fleas, lice, and ticks: Some bugs are guaranteed to have us scratching just at the mention of their name. But there are plenty of others that are less well known that also make our canine companions itchy and scratchy; for example mange, ear mites, waking dandruff mites, and demodex.

What these bugs all have in common is they irritate the surface of the skin. Some also cause allergic reactions to their saliva, when they bite and feed. But aside from raised red lumps and rashes, your fur-friend is going to scratch and chew, which means damaged skin that is ripe for bacteria to invade, leading to skin infections.

Skin is a shield, but a relatively weak one. It has its own immune system that’s designed to fight off infection, but it doesn’t take much to overwhelm it. When a dog’s general health is low or the skin is weakened by inflammation, then so-called ‘secondary invaders’ (think of them as squatters) take advantage. These could be bacteria, yeasts, or even fungi that colonize the skin. Whilst they can’t be diagnosed on appearance alone, they do tend to show tell-tale signs such as:

A real biggie in dogs is allergic skin disease. This common condition causes intense irritation that leads to chewing, licking, and scratching. It comes about when the immune system overreacts to pollens or other substances in the environment. This is the doggy equivalent of hay fever, except the pollens irritate the skin rather than the nose and eyes.

Our next set of dog skin conditions is internally driven. Seborrheic conditions are those when the skin turnover time is too fast. If this has you scratching your head, it simply means that skin cells are born, mature, and die too quickly. Thus the dog tends to have dry flaky skin, as that new skin cells catapult towards the surface too fast.

A related condition can also affect the grease glands in the skin, making them over active. As you might suspect, this causes a greasy coat as it’s constantly bathed in too much oil. And heck…that grease then attracts certain bacteria, so secondary infections are common.

The skin is an organ, and like any body part it can succumb to cancer. This may be a form of skin cancer caused by excessive exposure to the sun, or spontaneously arising cancers such as malignant melanoma.

Those dogs most at risk of sun-related cancers lack protective pigment in their skin. Thus dogs with pink noses, pink eyelids, or white patches in the coat should be protected from sun burn. And yes, this does mean keeping the dog in the shade in high summer and using doggy sunscreen.

In conditions such as lupus or pemphigus the immune system attacks the skin. For some bizarre reason it tends to attack where moist mucus membranes (such as the gums, lining of the rectum, or eyelids) meet haired skin.

Side Effects on the Skin

Last but not least in our romp through dog skin conditions are those down to general ill health which is reflected in the skin. In a similar way to when you’re sick your skin may break out or look dull, so the health of canine skin dips when a dog is unwell.

Common conditions such as Cushing’s disease or underactive thyroid glands can have a knock on effect on the coat. For Cushing’s disease this can mean thinning skin, blackheads, and bruising, whilst for hypothyroidism the coat is poor quality and bald patches develop.

Whilst you may not be able to prevent disease, you can go a long way to keeping your dog’s skin healthy. Simple things, like a monthly bath helps to wash away bacteria and rebalance the skin. Feed a healthy diet rich in vitamins and antioxidants, gives the skin the perfect building blocks for good health. And don’t forget parasite control, since preventing the itch goes a long way to preventing damage.

And last but not least, seek treatment early if your dog’s skin takes a downturn. Postponing that vet visit could mean complications develop, which mean that pesky problem takes longer to bring under control. Let’s hear it for glossy coats and itch-free canines!

Enjoy the benefits of a feathered friend who is happy, healthy and content. If you own...
Previous article
Why Are Cats Scared of Cucumbers?
Next article
First Aid Guide for Cats