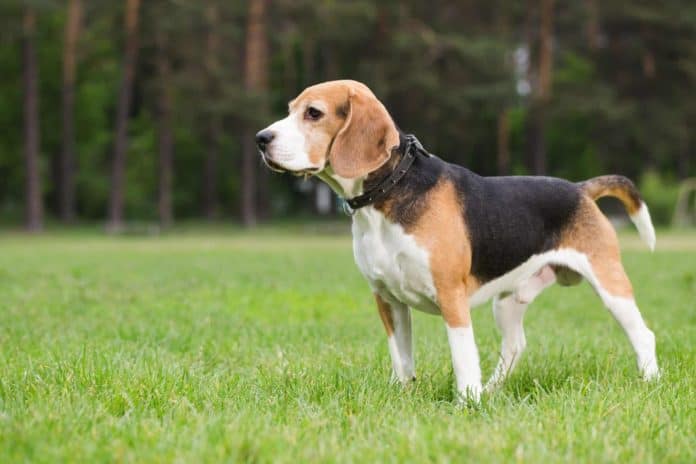 This fun-loving, high energy scent hound is a great family pet and always eager to train and play.

Beagles at a Glance

Beagles were originally used for hunting and have a highly developed love of chasing scents. They are particularly well-known for their lack of recall if they are following their noses and for their love of food. Their intelligence, willingness to work and family friendly image has seen them installed as Australian Department of Agriculture detection dogs.

Beagles are popular family pets due to their size, temperament and easy-care coat. They are generally fun-loving and happy dogs who have relatively few health problems.

Who is a Beagle Looking For?

I would love to live with a family that has the time to take me for long walks and sniffs somewhere interesting. I do love to play and need lots of company and someone who has time to spend with me. I get bored easily, so I would like to live with a busy family who is home a lot to play with me, or who will include me in their family activities. I would also enjoy living with another dog.

Playful. Life is just a game to your average Beagle. They love chase, ball-games and playing with other dogs. As they get older they can become a little lazy, but if kept at a healthy weight will often stay playful into middle age.

Stubborn/Strong-willed. Beagles are known to be a little stubborn at times. They can be easily trained if motivated and only positive training methods are used, but they will often have a mind of their own, particularly if chasing a scent.

Intelligent. These intelligent dogs are very trainable and need at least 2 hours a day of exercise and training when young and continuing on into adulthood. Without mental stimulation and training they become easily bored and sometimes destructive.

Beagles need lots of training, mental stimulation and exercise. They are naturally very active dogs who love to play. They do love kids and have a happy-go-lucky nature that means they would be content to romp around in the yard playing ball with the kids all day if you let them. Beagles are not suited to long periods of solitude, so if you are not home, consider another playmate or a dog walker.

Beagles can be jumpers, so do make sure you have high fences and a nice secure backyard.

Beagles are low maintenance in the grooming department, having a short coat. They do shed, but the hairs are fairly short and they are not considered an excessive shedder.
Beagles, having pendulous ears can be prone to ear infections, so regular ear cleaning can help to prevent this problem.

Beagles are great with kids and love busy family life where they can play and get lots of walks and attention. They are not well-suited to homes with smaller species they may be tempted to chase. They are very sociable and love other dogs and company, so consider adopting two dogs if you are adding a Beagle to your family.

Beagles are generally very robust dogs and asides from some health conditions like ear infections they are generally don’t have significant health problems. They do like to eat and are very active, so often have an insatiable appetite. They can be prone to over-eating and gastroenteritis due to their foraging behaviour. They do also have a tendency to gain weight. It is important to make sure your Beagle does not have access to the garbage and to watch what you leave lying around the house at home.

Intervertebral Disk Disease. When disks degenerate in certain breeds, the disk can rupture and compress the spinal cord. This leads to back pain and loss of function in the hind limbs. In severe cases this requires immediate surgery to decompress the spine. In mild cases rest and pain relief are prescribed.

Due to their pendulous ears, ask your vet how to do regular ear cleaning, particularly if your dog swims, licks his feet or gets frequent ear infections.

Avoid weight gain and ensure your Beagle does not have access to the bin, leftover human foods or anything lying around, as they are prone to eating unusual things and developing gastroenteritis.

Beagles were originally bred from Harriers for hunting hares. Being a smaller dog they were considered a bit slower than other long-limbed hunting dogs, but they were very reliable at following the scent of their prey. Usually they would hunt in close-knit packs of up to 40 dogs.

Beagles are utilised by the US, Australia, NZ, Japan, China and Canada as customs and border protection dogs. They are hard-working, easily motivated dogs who have a less threatening family-friendly image, compared to larger dogs.

Due to their calm temperament and size Beagles are also often used for animal testing and research, when dogs are required. While experimentation and research only rarely uses dogs, this practice is becoming less common and is now banned in most European countries.

Those who remember the Peanut comics by Charles M. Schultz know that the character Snoopy was a Beagle, with lofty aspirations to be a fighter pilot and novelist became running jokes throughout the Charlie Brown comics.

A total of 8 Royal Navy (UK) ships were named HMS Beagle between 1804-1909, including the second one that transported Charles Darwin on his voyages of discovery.

Enjoy the benefits of a feathered friend who is happy, healthy and content. If you own...
Previous article
Dog Food: A Balanced Diet for Your Dog
Next article
Feline Upper Respiratory Infection and How to Treat