Dogs love to eat. The problem is that some of the human foods that we like are simply no good for your dog’s health.

Your dog likes snacks, and you like snacks, and you like to share your snacks with your dog. Who can resist those puppy-dog eyes? Unfortunately, just as your dog can eat certain things that aren’t good for you, many of the things we eat are not good for your dog. To avoid a sick tummy, a visit to the emergency veterinary clinic or worse, take a look at this list of people foods that your dog should not eat.

You already know that chocolate is bad for dogs, right?

Chocolate contains Theobromine – a chemical that is related to caffeine, and it is also found in tea. It is poisonous to many types of animals, including dogs and cats. Most pet parents are aware that chocolate isn’t good for their dogs, even if they’ve never heard of the toxin itself.

Some people will tell you that the risk of theobromine poisoning is overstated, and that chocolate isn’t really all that dangerous, especially to larger dogs. Your Dairy Milk® bar has about an eighth of the theobromine compared to a similar quantity of baking chocolate. White chocolate has less still.

The danger is calculated by body weight. If your Wolfhound has snuck a bit of chocolate cake or the half-dozen chocolate chips that fell on the floor while you were baking, he’s probably going to be okay. If your Yorkie gorged herself on chocolate bonbons, get her to the vet. If she ate enough of it, it could kill her.

Xylitol is a sweetener used in some kinds of candies, chewing gums, and specialty dental products. It’s found naturally in many food plants, although commercial xylitol is usually made from corn husks and Dupont Chemical makes theirs from hardwood. 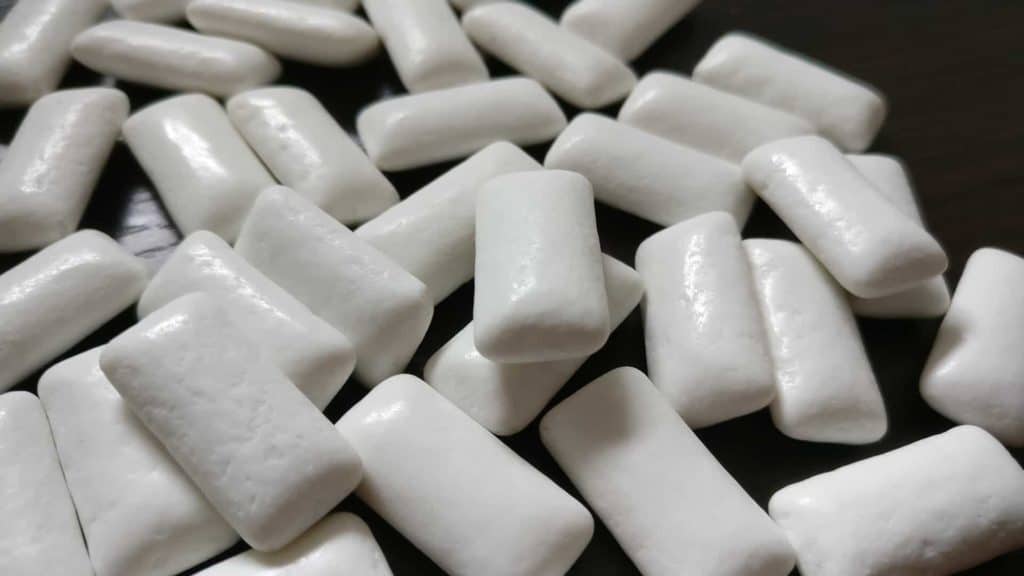 This sweetener is generally considered safe for human consumption. However, it is very toxic to dogs. This stuff can kill Fido, so if he’s gotten into some, take him to the veterinary hospital or emergency clinic immediately. (Xylitol.org, 2010)

Over the long term or in very high doses, onions cause damage to the red blood cells in dogs and cats. 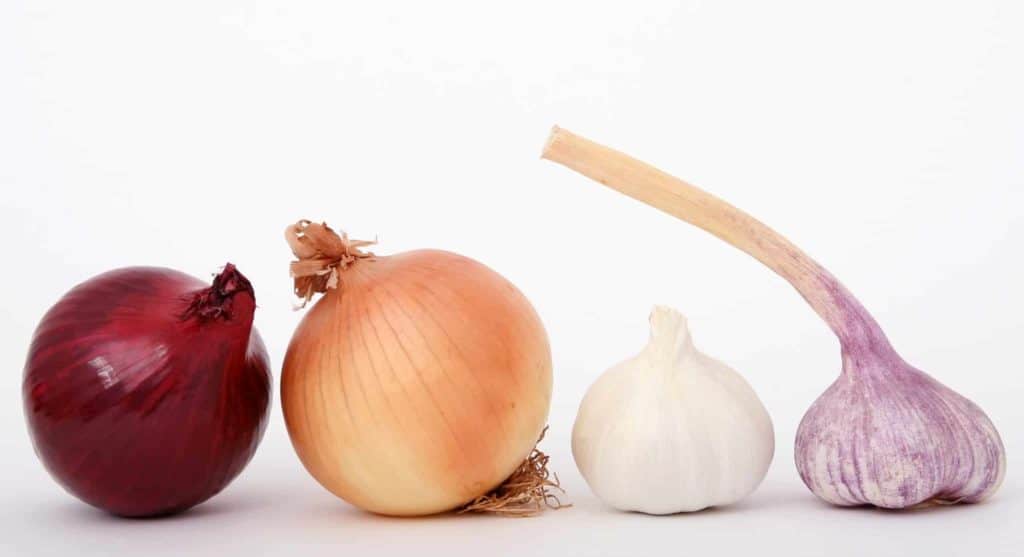 This is true of the entire onion family, including leeks, chives, shallots, and so on. Lilies, daffodils, tulips and the like are also best kept out of your dog’s reach. Simple version?  If the plant grows from a bulb, it is not safe for your dog to eat. (ASPCA)

A moment ago, we discussed Theobromine.  Caffeine causes the same kinds of problems, but worse. In fact, when your body processes caffeine, one of the products is theobromine. 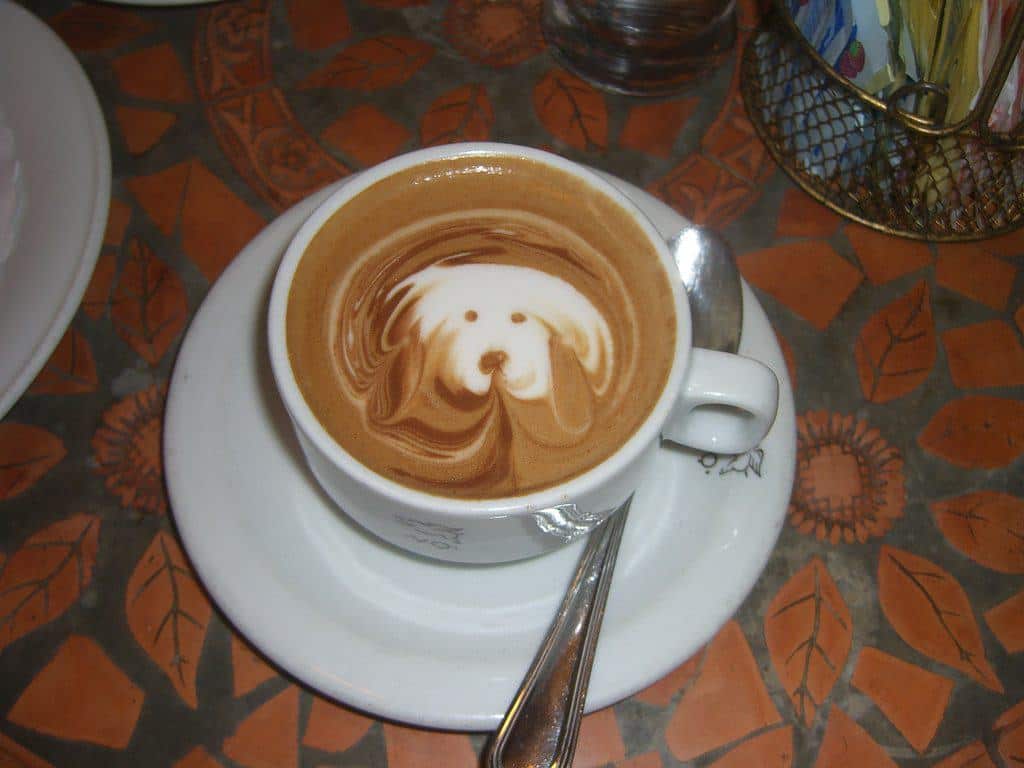 Grapes are poisonous to dogs. Unfortunately, we don’t know what exactly the toxin is, or why they cause problems, and therefore it is impossible to predict how many grapes it would take to kill the pet. To be safe, if Rover has eaten any grapes, rush him to the vet, after all better safe than sorry. If the vet can treat him before his kidneys are damaged, the dog can often be saved. (McKnight, 2005) 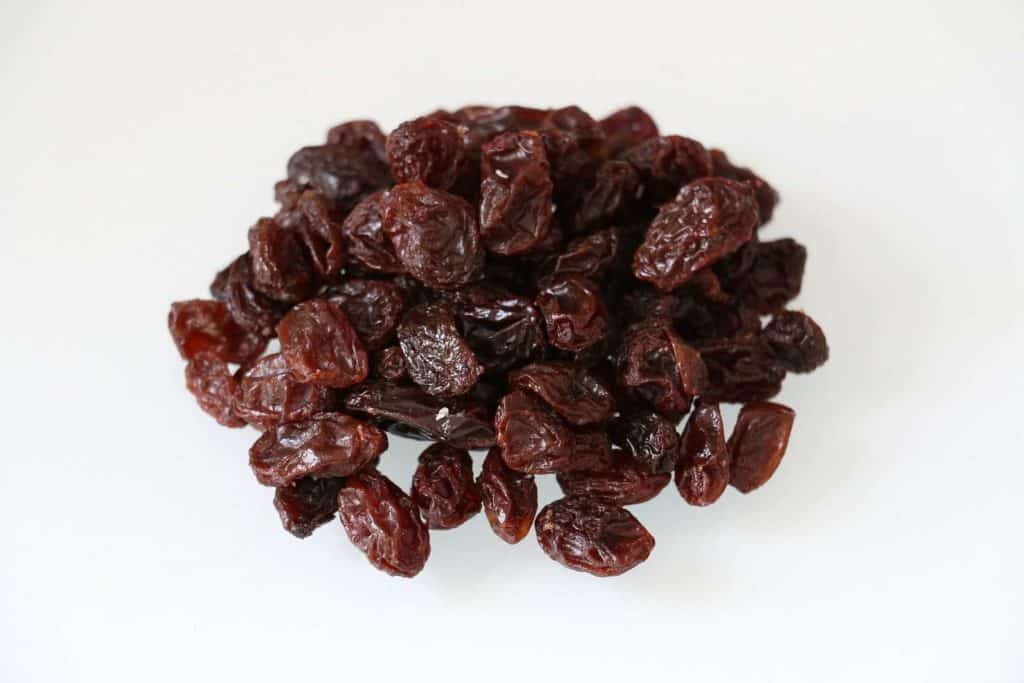 Raisins are nothing more or less than dried grapes, with all the grapey goodness condensed into a tiny packet. It shouldn’t be any surprise that while grapes are bad, raisins are worse and you should avoid giving it to your dog.

Macadamia nuts are another odd one. According to the Merck Veterinary Manual, dogs are the only animals for which macadamia nuts are poisonous and it isn’t known what makes the nuts dangerous. 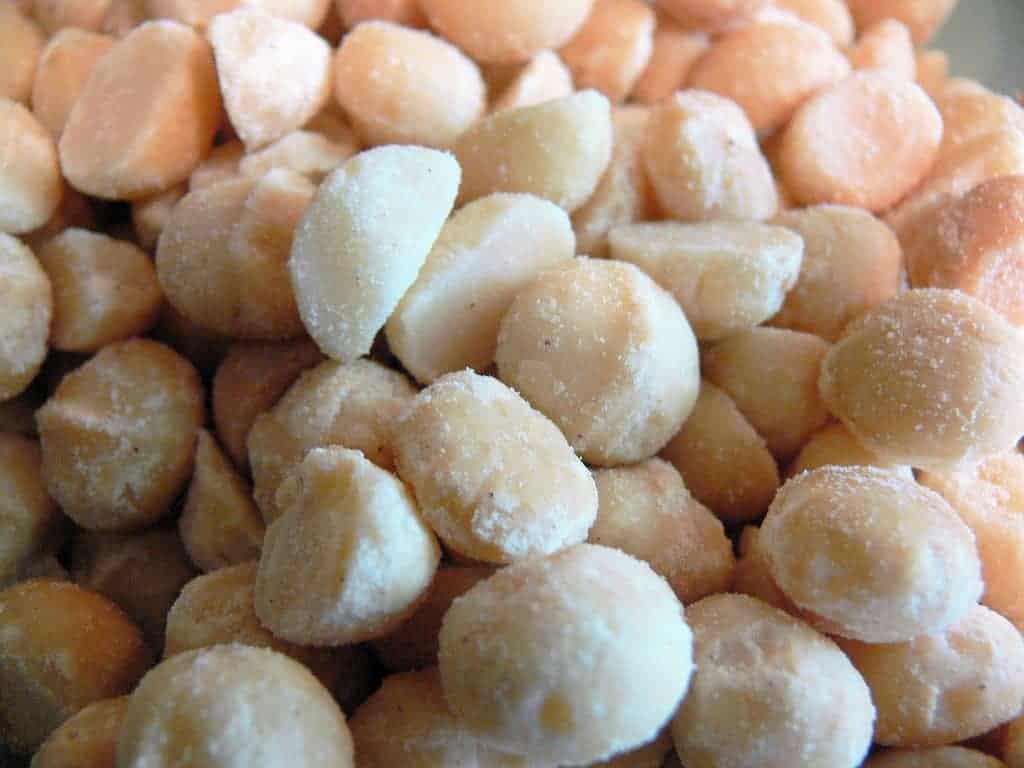 Usually, macadamias only make the dog sick, but in combination with some chocolate, they can kill your dog.

It shouldn’t be any surprise that alcohol is harmful to dogs. It’s actually poisonous to us, too, if enough is consumed, and most dogs are smaller than the average adult human. 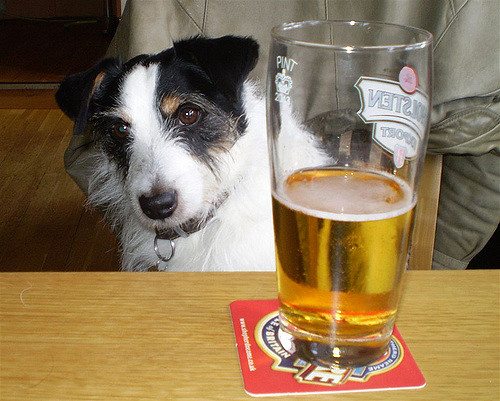 Mushrooms bought at the store are okay okay for your dog to eat.  However, when it comes to wild mushrooms, there are some mushrooms that won’t hurt your dog – mushrooms are tricky. 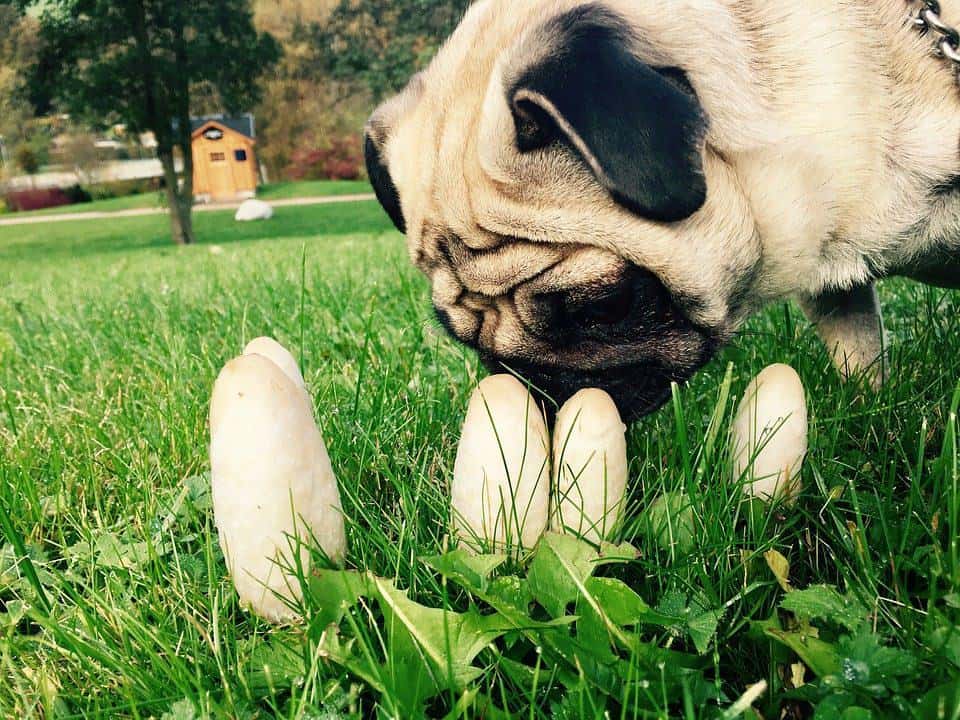 Some species are safe if grown in one area but not safe if they are grown somewhere else, and some are only safe if they are not combined with certain other ingredients. Also, the signs of mushroom poisoning can take a day or more to show up.

Play it safe. Fido’d prefer a piece of that steak to the mushroom sauce on it, anyway.

Avacado poses two risks to dogs. The first one is simply that the pit is large and round. This means that it poses a choking hazard, and, if it is swallowed, it could cause an impaction (“plug”) further along the digestive line. 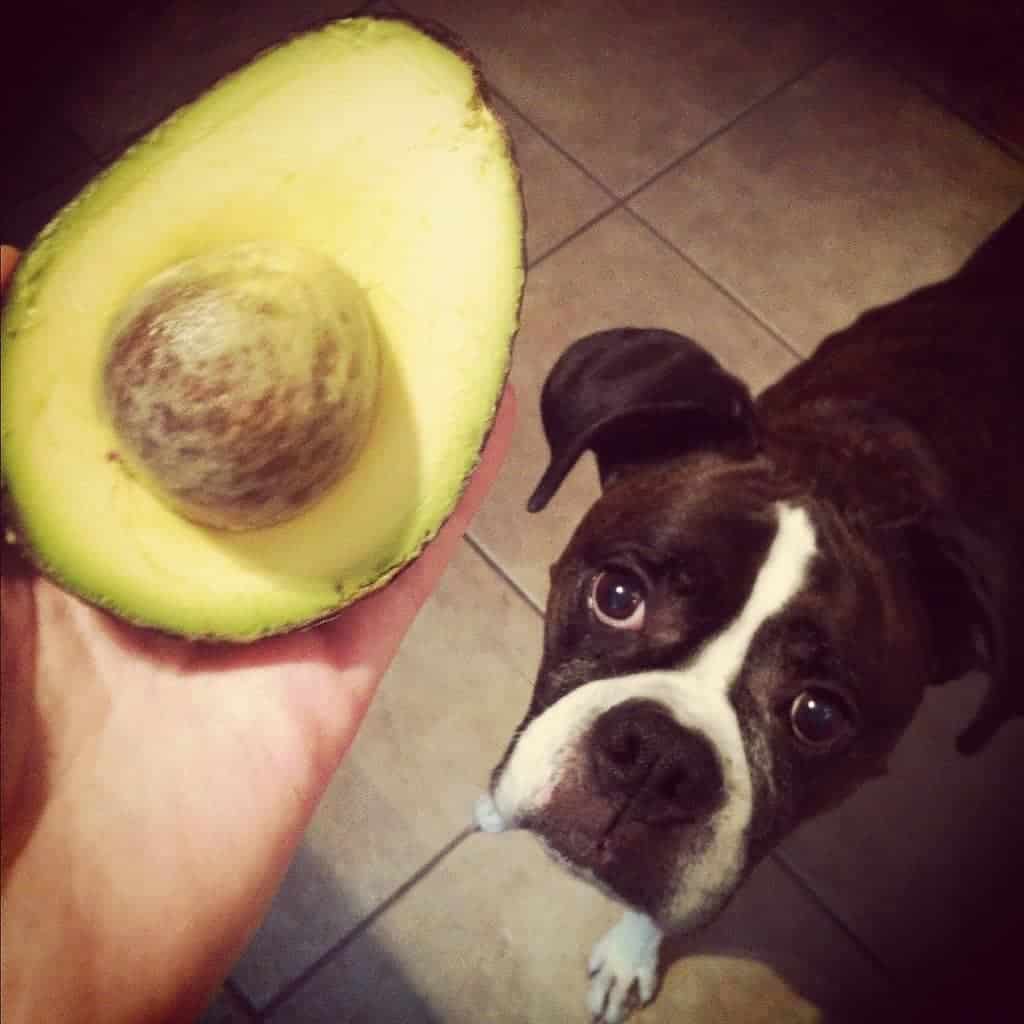 The second risk is actual poisoning. The plant produces a toxin called “persin” and this is poisonous to many animals. It causes heart damage and all sorts of problems with nursing, a bit of a strange combination. The Merck Veterinary Manual only reports two dogs running into heart problems as a result of persin poisoning, but the risk is there, and not all pet poisonings make it into Merck’s records. Merck is mainly concerned with livestock. Play it safe and keep the guacamole away from your dog’s reach.

Your pooch is a scavenger and he loves to eat anything he even suspects of being food, but keep him safe by sticking to safe foods.

If you want to share bites from your dinner, choose the parts that are good for him: plain white rice, cooked meats (without the onion-mushroom sauce, please!), and even honey-glazed carrots are all fine. Even better, give him a yummy dog snack such as a “bacon” treat or a canine cookie.

Keep him healthy, and keep him safe.

Enjoy the benefits of a feathered friend who is happy, healthy and content. If you own...
Previous article
Family Dog Breeds: Best Dogs to Own
Next article
Does My cat have a flu?