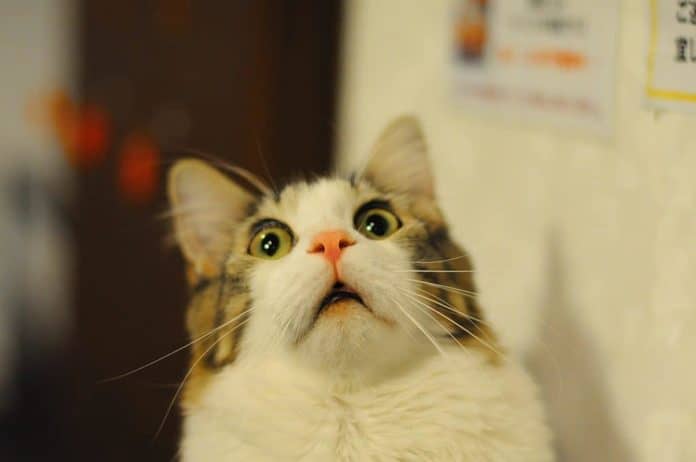 Cat videos are all the rage on YouTube, and some of the most popular videos include those of cat owners scaring their pets with cucumbers. In these videos, owners sneak up on their cats while they are eating and quietly place a cucumber on the ground beside them. When the cats finally notice them, they get a big shock and react by jumping up, four paws in the air, and running off in a panic. Why does this happen and what can we learn from it?

It’s been said that if cats were the size of lions, they would all kill their owners. Even the laziest, most somnolent cat is on the alert at all times. As predators, cats are always on the hunt. Their innate fears include fast moving items, flashing lights and noise toys. Random items showing up unannounced can startle them, as they are wary of any changes in their environment.

Why do cucumbers make cats jump?

It is not the cucumber per se that scares cats, but rather the fact that something has changed in their immediate environment without them noticing. As cats thrive on being hyper-aware of their surroundings, they panic if they realize that something has snuck up behind them and caught them unawares. In their minds, the cucumber could be a snake that’s crept up behind them, and their response is to try to get away from it as quickly as possible.

Should you scare your cat with a cucumber?

It can be tempting to try this trick. To a human, being frightened by a harmless cucumber sounds funny, and they reason that they are not really hurting their cats.

Well, it turns out doing this just to get some laughs on YouTube could actually be cruel to your feline friend. Tricking your cat into thinking a deadly predator has snuck up behind him can cause him a considerable amount of stress. Doing this repeatedly can even lead to behavioral issues, anxiety, aggressive behavior and even PTSD.

There is also the added danger of your cat hurting himself when he tries to leap away from the cucumber, or breaking something nearby. In the unlikely event that cucumbers are somehow an important part of your cat’s life and they have to be introduced to the object, it is best to present them with the item gradually, to avoid unpleasant surprises and unnecessary stress.

While the cat videos featuring fearful felines leaping away from cucumbers may seem ridiculous and funny to humans, pulling the same stunt on your cat can actually be very stressful for him, even if the offending vegetable is actually harmless. Imagine if someone dropped a rubber snake or spider on you each time you turned a corner and you’ll have a better idea of how debilitating the constant nervousness can be for your cat.

Here is a video of their reaction, but again…this can cause extreme anxiety in cats and should not be done for a laugh at your cats expense for the above mentioned reasons:

Enjoy the benefits of a feathered friend who is happy, healthy and content. If you own...
Previous article
Are You Prepared to Have A Dog?
Next article
What Should I Know Before Getting a Guniea Pig?