How Do I Crate Train My Puppy? 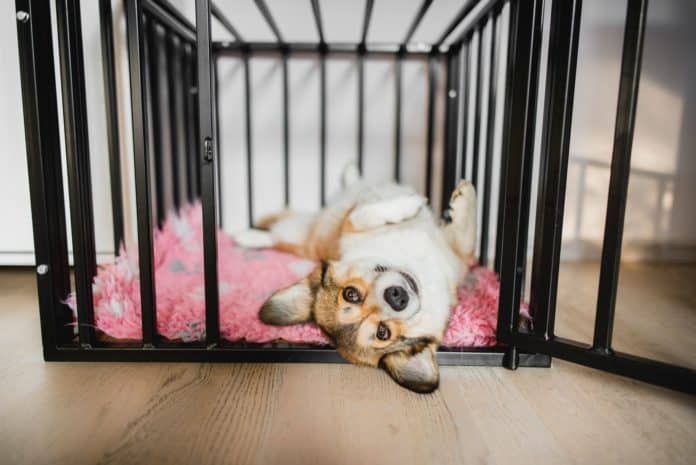 If you’re a new puppy owner, you might be wondering how to crate train your dog. It can be a bit daunting, but don’t worry – it’s actually pretty easy! In this blog post, we’ll walk you through the basics of crate training your pup. By following these simple steps, you’ll have your puppy happily crate-trained in no time!

Where do you go to feel safe?

When you’ve had a bad day at work, where is it you go to relax and recover? Perhaps it’s stretched out on the sofa or hiding under a duvet, but we all have a place we go when things get on top of us.

Actually, this is the idea behind crate training a puppy. A crate is the puppy’s den, a safe nest. Whilst superficially the bars may look like a cage, your pup doesn’t see things that way. What he sees is a warm, cozy cave where he feels able to sleep in safety.
From the pet parent’s perspective, a crate offers a means of keeping a pup safe from household hazards and it’s an aid to potty training. So what’s not to like? OK, when crates are abused by using it to punish the dog or leaving the dog inside for way too long, then it is undoubtedly a bad thing. However, when you know how to crate train a puppy in the right way, everyone is happy.

Plan Ahead for the Pooch

Before bringing pup home from the shelter or breeder, make some preparations.
First, choose the right sized crate for the pup. Just like Goldilocks and the Three Bears, the crate should not be too big or too small, but just right (which can also mean buying a second, bigger crate for the adult dog). Ideally the puppy should have room for a super-comfy bed and a water bowl, whilst being able to stand up without banging his head, turn around, and lie down with his legs stretched out.

Secondly, get hold of a blanket that smells of the mother dog, and place it ready and waiting inside the crate. The familiar smell will be a huge source of comfort when the newbie arrives in his new fur-ever home.

Where you put the crate is also important. Remember, your pup wants to feel connected to the family (rather than isolated) but in a place where it’s quiet enough to rest undisturbed. A great spot is the corner of a lounge room, where he can see the family watching TV but has his own space.

For this reason, whilst a laundry room is OK, it’s not an ideal location. Your pup may feel isolated and cut off from the rest of the house, which may cause him to bark. Also, a washer may suddenly go into spin cycle, which is alarming and may frighten the youngster.

Getting Started with Puppy Crate Training

You bring a new puppy home.

TOP TIP: The first thing to do is take him to the toilet spot, so he knows where he’s supposed to relieve himself. Now take him into the house.

You’ve already placed a few tasty treats inside the crate, so show him where it is. When he’s not looking, hide more treats in the crate. The idea is to have him link the crate to discovering tasty snacks. That way every now and again he’ll break off from play, to run over and see if any more treats have appeared as if by magic.

Also try putting a favorite toy in the crate. Then sit with him and play with the toy whilst he’s inside the crate (with the door open.) Change the toys around so there’s always something new to discover.

Anytime he happens to pop into the crate, be sure to praise him and tell him he’s a clever boy. He’ll lap up the praise and consider popping in just to get attention –  exactly what you want.

Try feeding him in the crate. And this is where things pick up pace, because whilst he’s distracted by eating, briefly shut the door. Leave it closed a few seconds and then open it immediately. Gradually extend the amount of time you leave the door shut.

Initially, he will be distracted by eating and not even notice the closed door. If he looks up and is quiet, then praise him. If he whimpers, ignore him. As soon as the whimpers stop, praise him and open the door. He is learning that good, quiet behavior is rewarded whilst crying gets him nothing.

As he becomes more relaxed and accepting of the closed door, move a little away from the crate. In the same way, praise his good behavior, and let him out once he’s calm. As training progresses, start to leave the room…but only return when he’s quiet.

A Word about How Long to Leave Puppy in the Crate

During training, keep his crate confinement short and sweet at a few minutes, gradually building up the time.

Once he’s happy to settle down and sleep, be careful not to overstep the mark by leaving him in the crate too long. As a rule of thumb, a puppy can only hold his toilet for the number of hours that he is old in months – plus one. Confused? OK, a two-month old pup can hold on for a max of three hours, whilst a four month pup can hold a max of five hours.

But…and it’s a big but…puppies need plenty of love, attention, and stimulation. Avoid leaving even older pups unattended in a crate for more than four hours at a time. It just isn’t fair to your best buddy, who may start to resent the crate rather than love it.

Crate training done right is makes for a happy, safe puppy. So keep those tails wagging by making his crate an interesting and comfortable place to be.

5 Rules to Follow When Searching for the Best Puppy Food

Enjoy the benefits of a feathered friend who is happy, healthy and content. If you own...
Previous articleHow Do I Stop My Dog Farting All The Time?
Next articleWhy is Bloodwork for Dogs and Cats Important?