How to Teach Your Dog to High Five, Play Dead, and Tidy Up 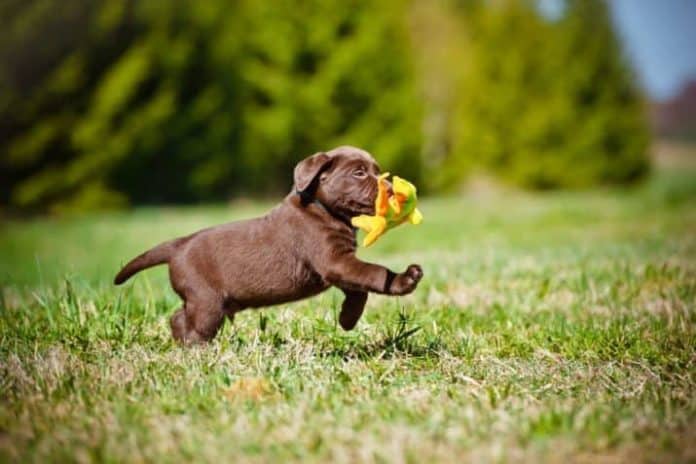 We tend to think of training as just a means to make our fur-friends well-mannered and keep them safe. But training has another role, in that it provides vital mental stimulation that stops your pet getting bored. Indeed, it’s a great idea to ‘teach an old dog new tricks’ as it’s the canine equivalent of doing crosswords, and helps keep the mind sharp. That aside…it’s also great fun!

But before we look at learning some tricks, let’s consider some basic guidelines so that training is something both you and the dog look forward to.

For more information on training, check out our introduction to training your dog article.

How to Teach Your Dog Tricks

You can teach a dog to do practically anything…within the realms of reason. The knack is to break the trick down into its parts, teach one bit at a time, and add on the next step once the previous ones are mastered.

Have the dog sit. If he happens to lift a paw slightly from the ground, click and reward. Repeat this until he starts to realize that lifting a paw is a surefire way to get a treat. If the dog doesn’t spontaneously lift his paw, then gently raise it with your hand, being sure to click and reward. He’ll soon anticipate what you want and start lifting it for himself.

The idea is the clicker (or you can say “Good” in an enthusiastic voice) helps him understand the action you want. Once he’s learned one step, you don’t automatically reward each time so he tries a bit harder (lifting higher) to impress and earn that treat. Last but not least, add a cue word such as “Shake” or “High five”, so he performs on demand.

For the finished trick, you aim a pretend pistol, say “Bang!” and the dog rolls over and lies still as if dead.

First, your dog needs a solid “Down”. To teach this, hold a treat near the dog’s nose, lower it to the floor and move it slightly away from the dog so he sinks to the ground to get it. The dog needs to be able to stay in a down position for a minute or so before you move onto the next part.

Encourage your dog to lie on his side. You may need to gently push his shoulder to do this. Again, train him to stay quiet whilst lying down.  A useful hint to do this is to reinforce this action by saying “Lay” when the dog happens to lie on his side to sleep.

With the dog lying on his side, hold a treat by his nose and move your hand as if drawing part of a circle, connecting his nose to his shoulder. The dog should follow the treat, and in the process roll onto his back. “Bang!” Add in your cue word.

If the dog’s standing and you say “Bang!” he may be confused and think you’re slightly bonkers. So start with the cue word while he’s in a lying position, then when he’s got that, go from the down position, and then eventually from standing.

Wouldn’t it be great if the dog tidied up his toys at the end of the day?

Well, it’s not as hard as you might think to teach “Tidy up”.

First, your dog needs to know how to “Fetch”, and does this reliably.

Now, find a box you want the dog to put the toys in. Place the box at your feet (you may as well relax, and do this indoors sitting on the sofa). Have the dog “Fetch”, but don’t reward him if he gives the ball to you, only if he drops it in the box.

If he ignores the box, then get his interest by putting a small treat inside. That way he’ll both drop the toy in and get a reward. Each time he does this, immediately he releases the ball says “Tidy up”.  Once he releases the toy into the box four out of five times you’re ready to move on.

Next, move the box a short distance from your feet. Continue the game of fetch but with the “Tidy up” command. If he’s learned well so far, he’ll continue to drop the toy in the box. OK, but this is a moving toy. Now try with a stationary one. Place the toy near the box and give the “Tidy up” cue.

If everything’s going swimmingly, put two toys side by side. Now here’s the rub. You don’t reward him for one toy, but only when he puts both in. Each time he masters a slightly more advanced part of the trick, you add an extra element, such as a third, fourth, or fifth toy, until Bingo! He puts his own toys away.

Now to try that with the kids….

Using these principles you can teach your dog to do just about anything, and impress your friends and neighbors. Plus, he’ll lap up that one to one attention, and it will do his brain good. What’s not to like!

Enjoy the benefits of a feathered friend who is happy, healthy and content. If you own...
Previous article
Why Do Dogs Eat Grass?
Next article
Separation Anxiety: When Your Dog Can’t Be Alone