Contrary to popular belief, dogs are not color blind. They do, however, see the world quite differently to humans.

Dogs are more reliant on their other, superior senses. Their sense of smell is amazing and their hearing is much more acute than ours. The fact that their vision is a bit fuzzy and lacks some color compared to ours is really no disadvantage in the doggy world. So what do dogs see?

Dogs have retinas that have fewer cones but more rods compared to humans. More rods means they detect movement and light better.  The cones are responsible for color vision, so the fact they are there means that dogs do see color, they just see it differently.

Their vision is dichromatic, so they primarily see blues and yellows. Humans usually see trichromatically with visible variations of red, blue and yellow. So a dog’s vision is similar to being red-green color blind, which is a common variability in humans.

Of course we really don’t know how dogs see, we just make this assumption based on what the retina looks like on a cellular level. It is quite possible that dogs assign colors in a completely different manner to us, and they could rely on brightness and contrast to identify different colors more than what we do. For example a dog may not be able to differentiate a green ball compared to a red ball, but they may be able to detect a difference in the brightness or contrast between the two colors.

Dogs are much better than humans in low light situations and are known as crepuscular hunters. Crepuscular is derived from the Latin for ‘twilight’. This means they are much better at spotting that possum up the tree in the yard at dusk. This is certainly an advantage for them (though perhaps not for their human housemates).

They have a tapetum that shows up in flash photographs as a greenish hue in the eye. This reflective surface sends the light back over the retina so there is double the chance of picking up that light via the photoreceptors.

Dogs are able to identify their owners at a further distance if their owner is moving, rather than stationary. This ability to track a moving object has an evolutionary advantage for a species known to give chase. It also helps them catch a Frisbee.

Dog vision is a little more fuzzy than ours. The measure of visual acuity is often stated as a normal of 20/20 vision, which basically means that at 20 feet we can see two things that are 1.75mm apart. Dogs vary in their visual acuity and their Snellen rating can be estimated to be around 20/75, though this is estimated based on a poodle in Germany who was vision tested and may vary. This particular Snellen rating means they can recognise lines on a chart at 20 feet that a regular human could detect at 75 feet.

So while dogs don’t see colors quite like we do and have slightly fuzzy vision, their eyes are better adapted to movement and low light. They also rely on their sense of smell and hearing more than we do, so it is true that they do see the world a little differently to us (but it isn’t because they are totally color blind!) 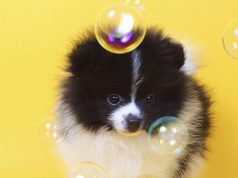 Using Shampoos and Conditioners to Wash Your Dog 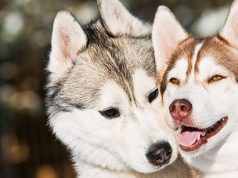 What to Know Before You Get an Alaskan Malamute Puppy 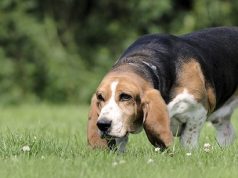 Best Dogs for People with Allergies