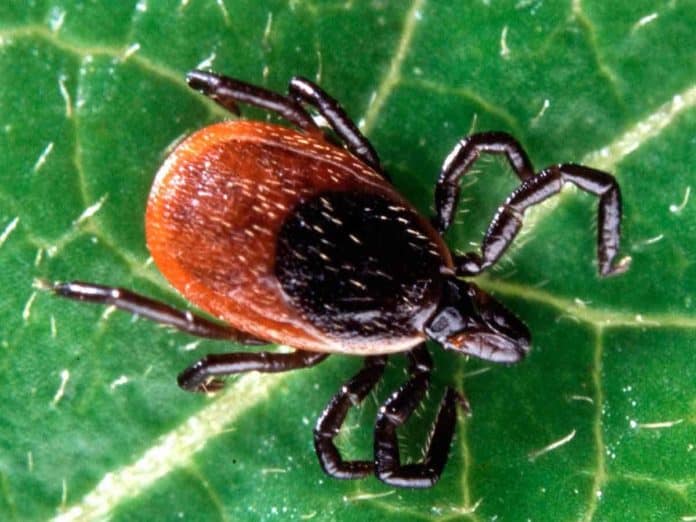 In high-risk areas, an estimated 75% of dogs are infected, so this is a disease to take note of. But you wouldn’t be the first owner to think, “What the heck is Lyme disease?” Whether this is news to you or you’re hazy on what to watch for, here is your Lyme disease 101.

What is Lyme Disease?

Lyme disease is caused by a bacteria, called Borrelia, carried by ticks. When an infected tick bites a dog, the bacteria are transferred into the dog’s bloodstream. This is a similar pattern to malaria, where an infected mosquito bites a person.

Borrelia circulates around the dog’s body and settles in the joints. This causes fever and inflammation, with the dog being vaguely unwell and a shifting lameness. Early in infection, a course of antibiotic is curative. However, once well-established infection can cause more serious complications.

And if you’ve heard of Lyme disease in people, yes, humans can suffer from Lyme disease. However, it can only be caught from the bite of an infected tick, and not passed directly from dog to human.

Is your Dog at Risk?

If yours is a lapdog and the closest they get to nature is the National Geographic channel, you don’t have to worry – Their risk is very low. However, it’s the active dogs, especially those exercising in scrub or woodland that are most likely to contact infected ticks.

Here is a map to show the some of the most at risk areas from the Companion Animal Parasite Council: 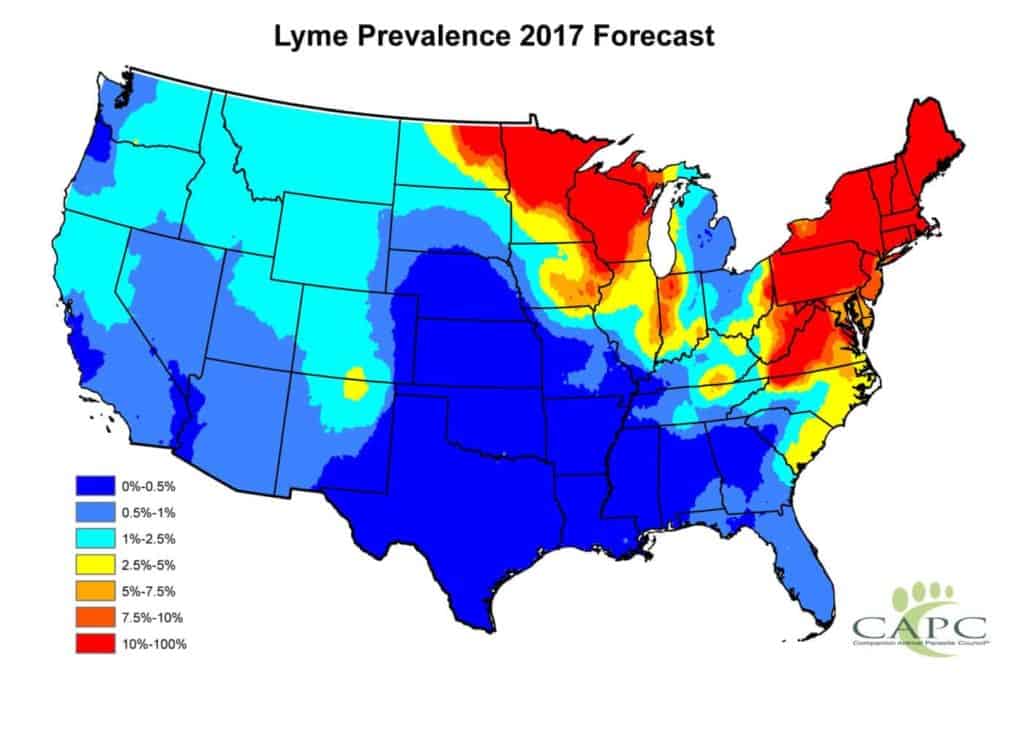 Ticks are the baddies when it comes to Lyme disease. Most tick species can harbor Borrelia, with the White-footed Deer-mouse Tick being the tick equivalent of Darth Vader and most likely to carry infection.

So those dogs most at risk are:

Oh, and don’t think a long fur coat is adequate protection against ticks. It isn’t. In fact, a thick coat just makes it more difficult to spot ticks and remove them.

Do take Lyme disease seriously. Statistics show that in areas where Lyme’s is present, around 75% of dogs become infected. But this isn’t quite as scary as it sounds, because the majority of dogs will develop natural immunity, whilst only an unlucky 5 – 10 % have active disease and become ill.

What are the Signs of Lyme’s Disease in Dogs?

In people, a typical sign of Lyme’s disease is a Bull’s eye rash radiating out from the tick bite. However, in dogs, there’s no such sign. Indeed, even if your dog becomes sick, this doesn’t happen straight away. Indeed, it’s often weeks or even months before the dog is obviously ill.

So if your dog shows the signs above, don’t rule out Lyme’s just because he hasn’t been to the country for weeks. It might be that previous summer’s outing to the woods, was the source of a tick bite which went undetected at the time.

How Does the Vet Diagnose Lyme Disease in Dogs?

In a Lyme endemic area, the clinical signs alone can be enough to flag up a suspicion of Lyme disease.

Confirming that suspicion can be tricky since although there are blood tests (looking for the body’s immune response and / or Borrelia DNA), these tests can throw up false negative results. If the suspicion is strong enough, your vet may discuss treating the dog anyway. Or alternatively, they may repeat the tests after a few weeks.

The good news is that when Lyme disease is spotted early, it can be cured with a course of antibiotics. Borrelia is sensitive to a group of antibiotics called the tetracyclines, and a lengthy course with this inexpensive antibiotic may be all the dog needs.

Unfortunately, if the illness goes under the radar, by the time it is finally diagnosed some dogs will have irreversible damage to their nervous system, kidneys, or heart. All in all, it’s in everyone’s best interest and simpler to avoid infection altogether.

How can I Protect my Dog?

When you minimize the dog’s exposure to ticks, you help protect against Lyme disease. This doesn’t mean you should never visit the country, but just take certain easy precautions when you do, including:

At the end of each day check your dog over for ticks. Be sure to look in all those nooks and crannies, and private places.

Use a tick hook to cleanly remove the tick without leaving the mouthparts in the skin. Don’t be tempted to use old-fashioned removal methods such as burning the tick or coating it in Vaseline. These methods distress the tick and make it more likely to vomit borrelia into your dog’s bloodstream.

Use a Tick Preventative

Luckily, many flea products protect against ticks as well.  Check our our article for flea prevention for more information on this here.  There are several highly effective products that kill ticks or discourage them from attaching. However, each product has different features (such as whether it repels ticks or not, and how quickly the tick dies.)

Ideally, find a product that kills ticks swiftly, within 24 hours. This is an important landmark because the tick needs to be attached for around 24 hours before it transfers infection. So if you remove or kill the tick within this time frame, your dog should be OK.

Ticks love to live in the undergrowth, long grass, and shrubs. Do your bit by clearing leaf debris from your yard and trimming the undergrowth where ticks hide.

And finally, know that vigilance against ticks is well worth it, not just for Lyme disease but for other tick-transmitted diseases which could make your dog extremely ill.

Does My Dog Have Bladder Stones?

Enjoy the benefits of a feathered friend who is happy, healthy and content. If you own...
Previous article
Why Does My Cat Drink More Water?
Next article
Tropical Fish Care Guide