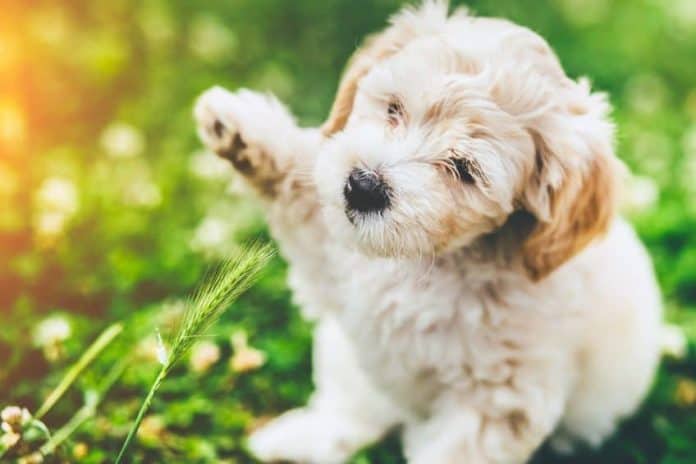 Bringing your brand new puppy home for the first time is an exciting time for pet owners, but it can be a rather frightening time for the young pup.

Responsible dog breeders usually allow dog adoption to take place when the puppy is at least eight weeks of age, which means for eight weeks of his life, the pooch has been kept in the warm embrace of his family. Surrounded by the warm bodies of his mother and siblings, the puppy has felt the same feeling of security us humans do when we are with our family members. So, when we bring home this small bundle of fur, it is important to remember that we are ideally taking him from his family. Therefore, the first thing you should expect when bringing your puppy home for the first time, is he will be feeling sad and lonely separated from his family.

When we talk about the anxiety and depression from a dog being separated from his owner, veterinarians refer to this behavior as Separation Anxiety. Although this behavioral problem is somewhat similar, a puppy feeling discomfort from separation from other canines is rather an evolutionary instinct, rather than a behavioral problem. Our domestic dogs today are all descendants of the wild dogs, or rather wolves, that European hunters came to domesticate over 20,000 years ago. Now, although tamed dogs are under human protection and have no true predators, that natural survival instinct is still tightly wired in their brain. The small, helpless pup knows at this stage in life, he is vulnerable to a predator attack without the security of his den and mother. Therefore, when he is taken from his mother, his natural instincts kick in as he begins crying and carrying on in an attempt to bring his mother back to him.

It is natural instinct that provokes a new puppy to make as much noise possible when he is separated from his pack for the first time. When you bring the pup into your home, your pup will likely howl, whimper and whine for the first couple nights. The behavior will likely carry on for the next couple days or weeks, as your puppy feel anxious to sleep so far away from home. Similar to the experience of bringing a new born baby home, it is at this time that you can expect to have several sleepless nights spent comforting the new, basically baby puppy. The first night home will be the most frightening time for the young dog and the most trying time for new dog owners, which will call for gentle patients from you.

Laying Down the Groundwork

Separated from his mother and siblings, the pup now finds himself in a strange environment with new smells, new people in addition to perhaps a new house mate, i.e. another pet. It is your job to make the puppy feel loved, secure and above all, safe. The first night with the puppy is where you will lay the groundwork down for your life-long relationship together, so it is important to establish a strong bond right from the start.

The biggest mistake dog owners make when they bring their new puppy home for the first time is separate themselves. If the puppy is brought home during the day, plan to take that day off from work or have an adult stay with the puppy. Put yourself in the puppy’s “shoes,” how would you feel if you were taken from your home and dumped off in a brand new place all alone, having no idea where you are? Pretty scary feeling, on both a canine and human aspect. So, take some time to explore with the puppy, introduce him to different rooms in the house so he knows there is nothing to be afraid of. Engage in playtime, allowing him get to know your scent and familiarize that scent with the happiness of playing.

The first night home with your new puppy, you will soon discover that puppies are pretty noisy. They howl, whine, bark and scratch at the door in an attempt to be reunited with his mother. The puppy will have a hard time sleeping the first night and, as stated previously, it is important for you to make him feel safe. The biggest and most common mistake pet owners do when their pup starts crying, is move the dog out of ear shot. This response may help you get some shut eye, but the puppy is even more scared than before and will usually cry as loud as he can into the daylight hours. Instead, the new puppy should be brought closer to the new owners to feel safe. You can place the pup in a carrier, or tie him in your bedroom with a dog bed, or a shirt/blanket that has your scent. Having your scent now close to the pup as he sleeps, will strengthen that bond as he connects safety to your smell. DO NOT allow the puppy to sleep in bed with you. Not only can this be dangerous for the pup (falls, or squish), but that puppy will grow and expect to be allowed in your bed all the time, even when he gets to be 100+ pounds.

Although your puppy is pretty young yet, it’s never too early to establish a bathroom routine with your dog. Puppies have pretty tiny bladder and will need to eliminate throughout the day, as well as during the night, so expect to take your puppy out to the yard frequently. We like to estimate the times a puppy will need to be let out by adding a one to the number the puppy’s age. For example; if your puppy is eight months old, you should expect him to need outside to eliminate about every nine hours. However, keep in mind that a nervous puppy often “fear tinkles” meaning that when he is frightened, he will urinate. Don’t scold the puppy, as scolding will just make the infant more scared. Simply catch the pup in the act and take him outside to his designated bathroom spot in the yard. Keep in mind that a puppy may walk around and eliminate several times before he is done, so make sure his tank is on empty before bringing him back in the house.

To avoid accidents at night, make sure to take the pooch out to do his business before settling in for the night. As stated previously, puppies have small bladders, so expect to be woken up in the middle of the night to take the pup out to eliminate at least once. This is a good time to establish a differential between separation whimpering and “need to go” whimpers from your new puppy. In most cases, if your puppy was previously quiet and then started making noise, he likely needs to go to the bathroom.

Now that you’re prepared for the puppy’s first night at your home, it’s time to think about the other important things to make sure your puppy is happy and healthy:

Enjoy the benefits of a feathered friend who is happy, healthy and content. If you own...
Previous article
How Do I Clean My Dog’s Ears?
Next article
Irish Wolfhound