This South African breed is stunning to look at, very intelligent and not for the inexperienced dog owner.

Rhodesian Ridgebacks are very popular dogs, prized for their loyal temperament and impressive appearance. A Ridgeback who has had good quality exposure to young children as a puppy and some good training will make a great addition to any family. A bored, poorly trained dog can be a difficult dog to live with, though this can be true of any breed.

The size and strength of the Ridgeback means they will make a great guard dog, though the ridgeback is a gentle giant and will have to be heartily provoked to attack. They will only bark at usual happenings, so most likely you will not end up with a real yapper in the yard. They are prized for their endurance, strength and intelligence, so they do need lots of training and exercise.

WHAT DOES THE RIDGEBACK WANT IN THEIR PERFECT LIFE PARTNER/FAMILY?

I love to get out and about with my family. I would love to live with someone who runs or cycles and would enjoy an exercise buddy. I’m happy to live with another young, high energy dog so I have someone to play with. I really would like a big back yard to live in. I also need to be with family, so please don’t lock me outside, I do like to be an inside dog.

Excitable – this is definitely a fun-loving breed. They love to play and are high energy dogs that rely on getting lots of exercise and mental stimulation. They are often very boisterous dogs if not given limits and love people and other dogs.

Intelligent – These intelligent dogs are very trainable and need at least 2 hours a day of exercise and training when young and continuing on into adult-hood. Without mental stimulation and training they become easily bored and sometimes destructive.

Stubborn/strong willed – Ridgebacks are known to be a little stubborn at times. They can be easily trained if motivated and only positive training methods are used, but they will often have a mind of their own.

The Ridgeback is intelligent, highly trainable and easy to motivate. They do need good training or they will get bored and destructive at home. They would be ideally suited to someone who jogs or cycles or loves to go to the park for long games of fetch.

The coat of a Ridgeback is very easy to maintain, short, shiny and healthy. They are not particularly prone to allergies or skin disease and are not that smelly to live with. They can be difficult to bathe at home due to their large size, but with an occasional brush to redistribute the oils through the coat and get rid of dirt, bathing is optional.

This intelligent and fun-loving breed loves the hustle and bustle of family life and if well socialised is generally pretty good with kids. They can be a little too much for smaller kids, so would be best suited to older children. If nothing else that big happy tail can bowl over toddlers. They are best kept in multi-dog households, as they don’t like to be left alone.

The Ridgeback can be an expensive dog to own. Their health conditions tend to be high cost and they can be a little accident prone. Food bills will also take a significant chunk from the family budget.

Hip Displaysia – Many breeds are prone to hip dysplasia, and while more breeders are hip scoring in an attempt to breed out this devastating disease, in some cases it can still occur, particularly with overfeeding at a young age.

Dermoid Sinus – this neural tube defect is essentially a lump containing hair follicles, sebaceous glands and sweat glands that can communicate with the spinal cord and cause serious problems if it becomes infected (causing meningitis).

Degenerative Myelopathy – occurs in German Shepherds and rarely in other breeds such as Ridgebacks. This progressive condition leads to weakness in the back legs and leads to complete inability to walk.

Hypothyroidism – a hormonal condition that often leads to weight gain, lethargy, thinning hair and skin. The condition is very easy to treat with daily medication.

Bloat and Gastric Volvulus: Large deep-chested breeds are prone to bloat, which is where the stomach rapidly expands with gas and fluid. Bloat can often then lead to torsion or twisting of the stomach, which is rapidly fatal if not treated immediately.

Puppies should be regularly checked for evidence of dermoid sinus cysts. Breeders should not be breeding animals with this problem, as it is considered to be congenital and often requires costly and dangerous surgery to correct.

Avoid feeding too much, overexercising and do not supplement with calcium in growing dogs due to risk of orthopaedic defects like hip dysplasia or OCD.

To reduce the risk of bloat, avoid feeding one large meal a day. At risk breeds should be fed two smaller meals and should not be fed elevated. They should not be allowed to exercise within an hour of feeding. Also ask your vet about prophylactic gastropexy (a simple specialist surgery involving tacking the stomach in its correct position) when your pet is desexed to reduce the risk of bloat.

Ask your vet to check your dog’s hips regularly for hip dysplasia and make sure the parents of your pup were hip scored by the breeder.

The Ridgeback developed in South Africa and is thought to be based on a hunting dog used by the Khoikhoi people of the Cape Peninsula in the 17th Century. This dog had the ridge of hair that is so characteristic of today’s Rhodesian Ridgeback.

The breed was formally named in the 1870s when the Hope Fountain Mission in Rhodesia started breeding dogs with ridges to be used for hunting, including lions, baboons and wild pigs.

The Ridgeback was also known as the Lion Dog, but was not a lion killer, the dogs would simply hold the lion in place for the hunter to kill. They were pretty smart at avoiding being killed by crocodiles and snakes too.

The ASPCA often has Ridgebacks for adoption, just do an advanced search on their adoption page. 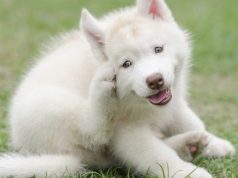 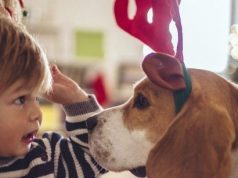 Creative Ways to Include your Dog this Christmas 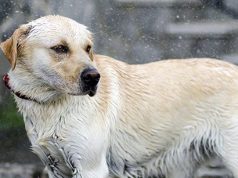