How Much Should Your Cat Sleep and What Does it Mean if They Sleep More?

If you’ve had a cat for any length of time, you’ve probably wondered why they sleep so much. After all, cats sleep for roughly two-thirds of their life, spending hours each day taking a snooze or in a deep state of slumber.

Most adult cats will sleep roughly 15 to 20 hours each day, with younger and older cats often sleeping even more! With all of that sleeping, it can be hard to know if your cat is sleeping too much or just enough.

Why do cats sleep so much?

Cats tend to sleep in frequent cat naps, although you will sometimes catch them in a deeper slumber throughout the day. Most cats are crepuscular, which means that they are more active at very early morning times and when the sun starts to go down, usually around dawn and dusk. The reason for this behavior is also the reason that your cat spends so much time sleeping. They are a predator species, and it is instinctual that they’re active when their prey is most active.

The majority of the time that your kitty spends sleeping will be in a lighter state of sleep, generally referred to as dozing. They tend to doze for periods of about 15 to 30 minutes at a time, and they will often have 5 minute periods interspersed with this dozing where they reach a deeper level of sleep. It is in this deeper level of sleep where REM sleep may occur.

When your cat dozes, they really are in a light sleeping state. You may even see them open their eyes occasionally when dozing! If they need to respond to anything, they can pop right up from sleeping in a dozing state.

Is my cat sleeping too much?

Kittens tend to sleep much more than most adult cats. Very young kittens that are just a couple of weeks old will actually spend almost all of their day sleeping, just waking up to eat. They will slowly become more active as the weeks past. Kittens tend to release growth hormone as they sleep, so their body is working on growing and developing while they are sleeping. If you have a kitten, you may find that he or she sleeps just about anywhere, which is not anything to be concerned about. That said, if your kitten is lethargic or weak, or if you have trouble waking them up, it’s time to talk to your cat’s veterinarian.

Young cats are typically more active than kittens, but you still might find them asleep in a variety of places. Like most other cats, they tend to be most active around dawn or dusk, so your cat should be raring to go at about the time that you get home from work. If your cat is found sleeping throughout the day, it’s probably not anything to worry about. If they are difficult to rouse or wander around at night vocalizing incessantly, it could be a sign that something is wrong.

Adult cats tend to be more set in their schedules than the younger kitties. They may even have a schedule and set places around the house where they are going to nap. In the mornings, they might sleep in the window where they can keep an eye on the birds, choosing to curl up on the couch later or in their favorite box by the afternoon. When your cat is sleeping regularly, there is no cause for alarm. A cat that won’t move up from their position or acts defensive may be uncomfortable and should be evaluated by a veterinarian.

As a normal part of the aging process, senior cats tend to spend a bit more time sleeping than their younger counterparts. One of the main reasons for this is that rest allows for tissue regeneration and healing to occur. These pets are commonly affected by issues such as arthritis and kidney disease, so time to allow their tissues to repair, a normal part of the cellular process, is essential. If you notice that your cat is lethargic or having issues getting into his or her favorite spot, it’s time to schedule a veterinary appointment.

Is depression in felines linked to increased sleep?

If your cat is spending more time resting than usual, you might be tempted to worry that they are suffering from depression. After all, depressed people spend more time sleeping or in bed. The good news is that cats don’t generally suffer from depression in the traditional sense. Instead, what you are seeing may be manifestations of other chronic health issues.

Like people, cats are often plagued with chronic health conditions as they age. They may suffer from issues such as a loss of appetite or changes in their sleeping patterns. If you’re starting to notice that your pet is exhibiting signs of reclusive behavior, it is likely time to get them to the vet.

A good physical exam and routine diagnostics can diagnose a host of health conditions, with some of the more common things being hyperthyroidism or an overactive thyroid gland, kidney disease, and arthritis. Pain tends to be under-diagnosed in senior cats as they suffer from joint pain and arthritis, but it is a very real phenomenon that can cause them to be in pain as they move or climb up and down from their favorite perch. One of the signs to look for in your cat is avoidance of a favorite resting spot, which can mean your cat can’t get to it any longer without pain. Talk to your veterinarian about signs such as this to help them diagnose health issues in your kitty. 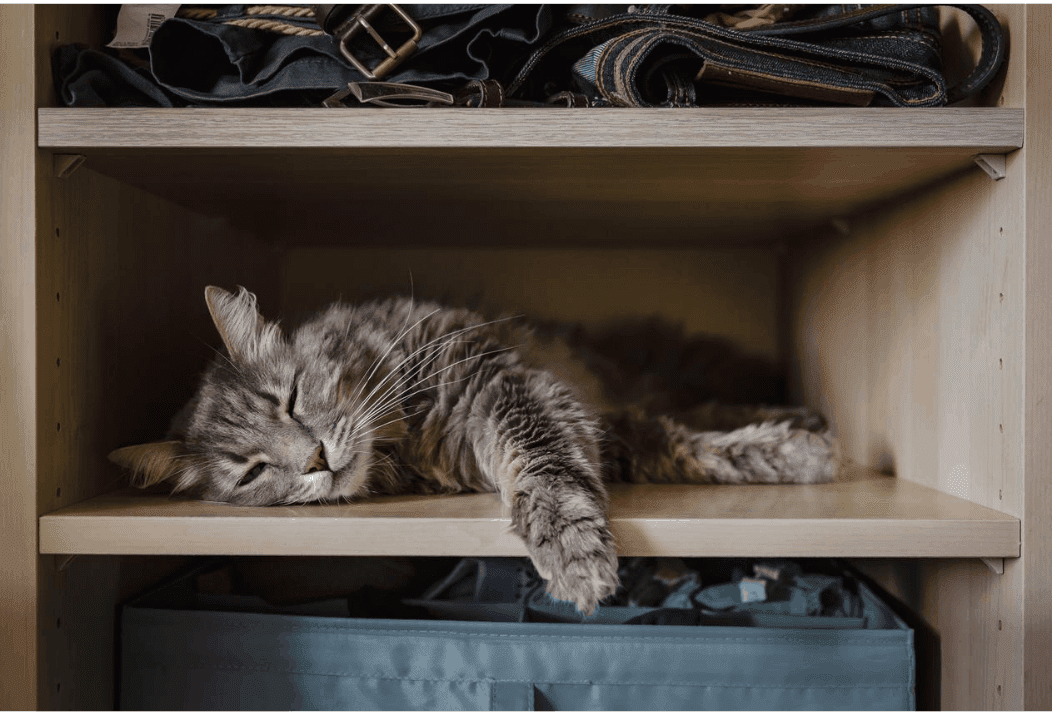 Keeping your cat healthy is one of the main ways to help minimize disturbances in their sleep. The so-called cat flu, which is a complex of upper respiratory infections, can commonly affect cats. Keeping their vaccinations up-to-date is one way to keep them healthier and avoid infections like the cat flu, this is especially important for young kittens and senior cats.

Cats tend to sleep a lot. Don’t worry too much!

Your cat’s love of sleep usually isn’t anything of concern, unless you’re seeing other health issues, like trouble getting around, vocalizing, or eye and nasal discharge.

If you start to notice any signs of potential health issues alongside an increase in snooze time, it is important that you speak with your veterinarian. Sleeping a lot in cats isn’t alarming by itself but in combination with other signs it certainly means a trip to the vet. Your vet will either put your mind at ease and or make sure that your fur baby gets the help they need to stay happy, comfortable, and healthy for as long as possible.

Enjoy the benefits of a feathered friend who is happy, healthy and content. If you own...
Previous article
Labrador Retriever
Next article
Hermit Crab Care Guide