Cats are famously elusive creatures. Affectionate one minute and aloof the next, they have a reputation for being less transparent and harder to read than dogs. Many humans struggle to communicate with their cats, even when they have been living together for many years. Others find them indifferent and uninterested. The reality is that communicating with cats usually does not come intuitively to humans. Here is how to decipher your cat’s language so you can better bond with her.

When a cat rolls over on its belly, that means you’ve won its trust. This posture puts the cat in a very vulnerable position as its sensitive belly is exposed and it cannot run away as easily. It is likely your cat feels safe in your presence, but for many cats it can be a betrayal of that trust if you rub them on the belly and will result in a nip and scratch. Some cats enjoy a belly rub, but for many this posture is simply about signaling that they feel comfortable, so keep your hands to yourself.

You can tell a lot about a cat from how quickly it is blinking. If your cat is blinking slowly and languidly, that is often a sign she trusts you enough to let her guard down around you. That is because when cats don’t trust someone, they never let them out of their sight. To return the affection, blink back at your cat in a slow, unhurried manner. This will communicate to her that you acknowledge her presence and are not going to harm her.

A cat’s tail indicates its emotional state. When it is relaxed and held in an upright position, that means the cat is feeling friendly. On the other hand, a rigid tail indicates tension and caution, while one that is held low indicates fear. If you see your cat’s tail puffed up with its fur standing on end, that means she’s angry or afraid and is tying to look larger and more dominant. A cat whose tail is jerking back and forth is annoyed. Finally, a cat whose tail is lazily draped around her is feeling affectionate or relaxed.

Avoid looking your cat directly in the eye, as this is how cats threaten others. It could be for this reason that cats tend to be drawn to people who ignore them, rather than those who pursue them. When a cat is frightened, its pupils grow bigger. This is to allow the cat to absorb as much information as possible. When the cat is angry or aroused, its pupils narrow in order to enable it to zoom in on tiny details. Do note, however, that since cats’ pupils also change size according to the light, you should pay attention to its body language when trying to figure out how it is feeling.

Mewing isn’t the only sounds cats make. Mother cats are often heard making a chirping noise when they are with their kittens. This is their way of getting the attention of their kittens and communicating with them. Occasionally, you might hear your own cat using this sound on you when trying to get you to top up her feeding bowl.

If you have ever heard your cat make a chattering noise that sounds like a string of staccato sounds, she was probably watching prey like birds, but was unable to get to them due to being stuck indoors. There are various theories as to why cats make this sound. Some scientists think they do it out of frustration, while others think it is to attract their prey by imitating their calls.

If you hear a cat hissing, spitting or growling, stay away, as that indicates it is frightened or angry and might react in an aggressive manner if you get too close.

The mysterious purring sound cats make can be confusing. While purring is usually associated with happiness and comfort, some cats also purr when they are hurt, hungry or tense. To be sure of how your cat is really feeling, observe her body language. If your cat seems relaxed and happy, you can probably take her purring to mean she’s pleased to be around you.

While cats are often portrayed as inscrutable creatures, it is really not so difficult to guess how your cat is feeling if you know how to read her behavioural cues. 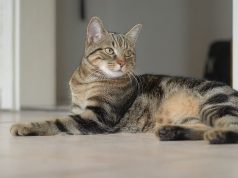 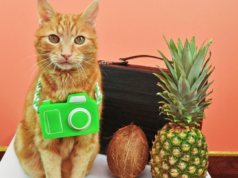 Taking your Cat on Holidays with you 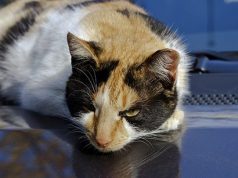